1:00
Look at you internally 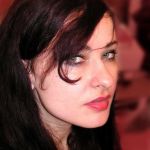 ⁣⁣Each of us is going through various metamorphoses through life,
triggered by new encounters, cognitions and experiences. This short
experimental movie, nonlinear and associative in nature, examines how a
woman, particularly, faces and confronts those events and how innocence,
authenticity and inner wilderness is opposed to our personas. They are
trying to keep us collected and protect from the world, but underneath
boils a dark, colorful, turbulent and flamboyant realm of subconscious
battles, demons, obsessions and our unhinged, animal side, keeping us in
constant state of alert and hypervigilance or breaking through in
fierce misconducts, losing control and dancing with our beasts. It is a
voyage through paradoxical paradise dystopia, full of danger, desire and
lust.

I was born in 1978 in Zagreb, Croatia. I graduated at the Academy of Fine Arts in Zagreb in 2004. I am engaged in visual arts (painting, drawing, photography, collage, installations, animation, multimedia), illustration and graphic design. I exhibited in numerous solo and group shows, in country and abroad (Zagreb, Sisak, Velika Gorica, Samobor, Varazdin, Cakovec, Karlovac, Rijeka, Kastav, Pula, Porec, Split, Makarska in Croatia, Mostar in Bosnia and Herzegovina, Tolmin, Maribor and Ljubljana in Slovenija, Novi Sad in Serbia, Betlehem in Palestina, Rosario and Santa Fe in Argentina, Szczecin in Poland, Napoli, Macerata, Padova and Rome in Italy, Edinburgh, Bradford and London in United Kingdom, Porto in Portugal, Forcalquier in France, Girona, Valencia and Alicante in Spain, Malmo in Sweden, Corvallis, Los Angeles, Roanoke, Sanibel (Florida) and New York in USA, Bangalore in India, Valkenburg in Netherlands, Tijuana in Mexico, Moscow in Russia, Thessaloniki, Greece; Berlin, Germany). My work was presented in many international printed and online publications; some of them are: A5, Gestalten, Self-As-Subject: The Multiple Exposure Project Zine, Stigmart10 Videofocus- special edition. My photographic work is included in three Saatchi Art Gallery collections. I received four awards for my work (one of them is for short experimental movie "Leviathan Of Desire").

1:00
Look at you internally